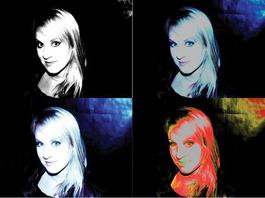 Ivana Masic was born and raised in White Plains, New York. She graduated from Manhattanville College with a Masters in Art and Education & a BFA double major in Business Management and Fine Art. She proudly teaches at Valhalla High School in NY and continues to further her degree and knowledge of the ever-dynamic Visual Arts .

Ivana also enjoys being involved with the community and various types of philanthropic work. Mostly, Ivana connects and dedicates her time to various clubs and services through the institution where she teaches so that she can help student artists evolve in the nature in which can help them learn and continue learning to be positive citizens of the world. Moreover, connects with those who make a positive change in the world.

Further, Ivana acted as Art Director for the NY based company called The Last Automat Press and designed over 30 book covers. Notably, she acted as the Education and Arts Director for CNYLA, a non-profit organization, which promotes unity, education, and culture among young professionals.

Ivana has also been added to IMDB for her artful achievements in film production. She acted as Art Director for the romantic horror film, Affections, and has performed, composed and recorded her music on the award-winning feature film, Fatalis.

Ivana has also enjoyed singing vocals for albums by Ludvig & Stelar: Beyond Second Thoughts, & other music productions. Another recent vocal is called AURA.

Another new endeavor is the recently published book HARDSCAPE/ABC, a book which illustrates Andrew Spano's poetry. This unique book expresses human existence in a syntax which pushes the imagination.